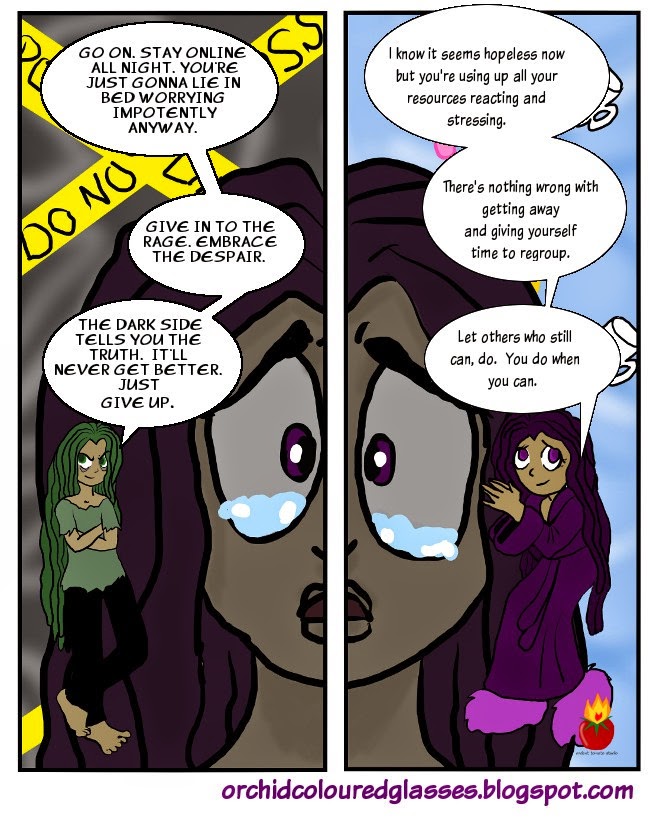 I had to remind myself that it was okay to distance myself from the roiling maelstrom of emotions my mind was becoming when the Ferguson grand jury decision was announced on November 24.

I wanted to get online and cuss out all the racists:

Even though I know rationally all that would do is start a pointless fight and convince the racists  of nothing because that's not a productive or constructive approach.

Then I just wanted to give up, because,  50 years has gone by since black people fought for -- and supposedly "won" our rights.  But black people -- unarmed black people -- are still being killed by random white people and white police.  And it seems like although the wrongness, the unspeakable, incomprehensible absolute dissonant wrongness of this, isn't enough to get people to care enough to do anything about it.

Worse, the ones in power like the status quo just like it is -- and don't necessarily want to do anything about it.

So to me, and people like me, the Ferguson Grand Jury decision was a disaster of Katrina type proportions.  It was a slap in the face.  A kick in the teeth.

So many people had to remember that. Including me.

I had to type this to remind myself and remind others that self care is survival. Self care means that I can hang on a little longer, and maybe share information and knowledge,  and find ways to show others their empathy and compassion.

Don't let anyone tell you you can't self care and do what you must do to keep yourself from falling apart.