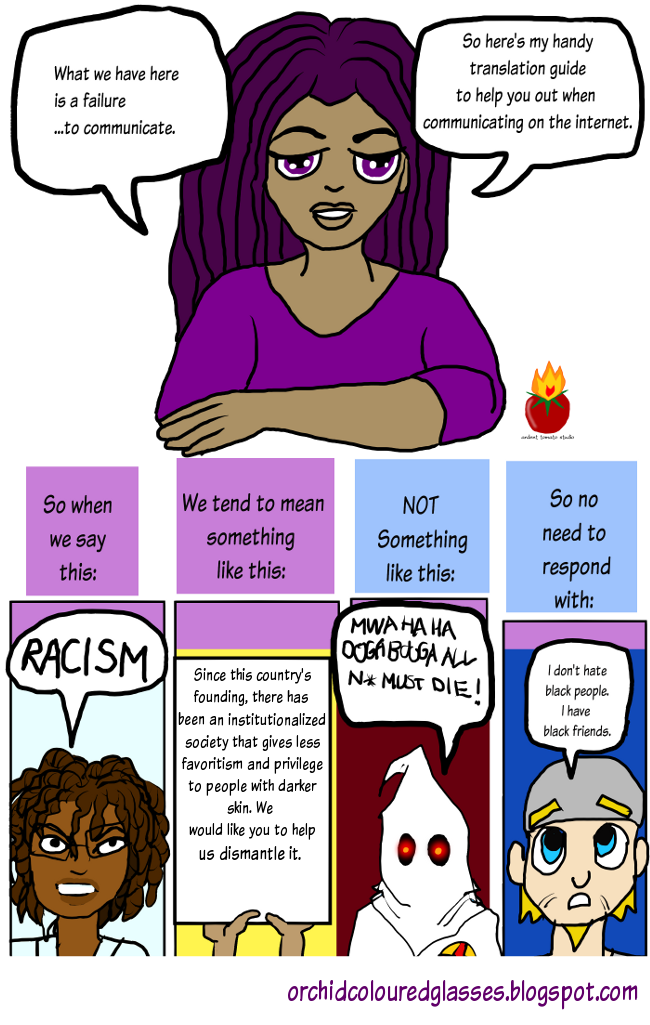 I've made this observation before and it has come off pretty well, so I thought I'd expand on it while race issues are simmering away. Hopefully people will find the message useful.

When black people or anyone not-white says "RACISM"  they are speaking of the societal design that gives white-appearing people the greatest favoritism and advantage in all aspects of life, and gives less and less to people whose skin is darker, leaving black people (the formerly enslaved by white people) with the absolute least.

This is why black people make less money than white people. Not because we're not hard workers, but because white people designed the system to benefit themselves first and best.

This is why white people's beauty standards are considered the default and women who don't naturally (or pay to make themselves) look that way aren't considered beautiful.

When we speak of RACISM we do not speak of white people individually. We do not speak of hatred, although hatred is definitely present in individual people who still carry the ignorance taught them from ancestors who first put forth the ideas that black people are inferior.

So when we speak of RACISM, we are not saying "you all hate all black people, and want us dead" (although in individual cases, there probably are people who think that way).  When we speak of RACISM we don't mean you can't have black friends.  We mean you are benefitting from a system that has been in place since before any of us now living were born.  We mean that whether you intend to or not, you benefit from it if you look white. We mean that whether you're aware of it or not, you're benefitting from it if you look white.

So please, any time you hear the word RACIST or RACISM, take a moment to run this communication guide through your head before you respond.

We know that as an individual it's unlikely you hate black people. That's not where we're coming from so you don't have to go there to defend yourself. Let's move on from a better understanding, shall we?
Posted by Indigo at 12:00 AM