Opinions Are Not One Size Fits All 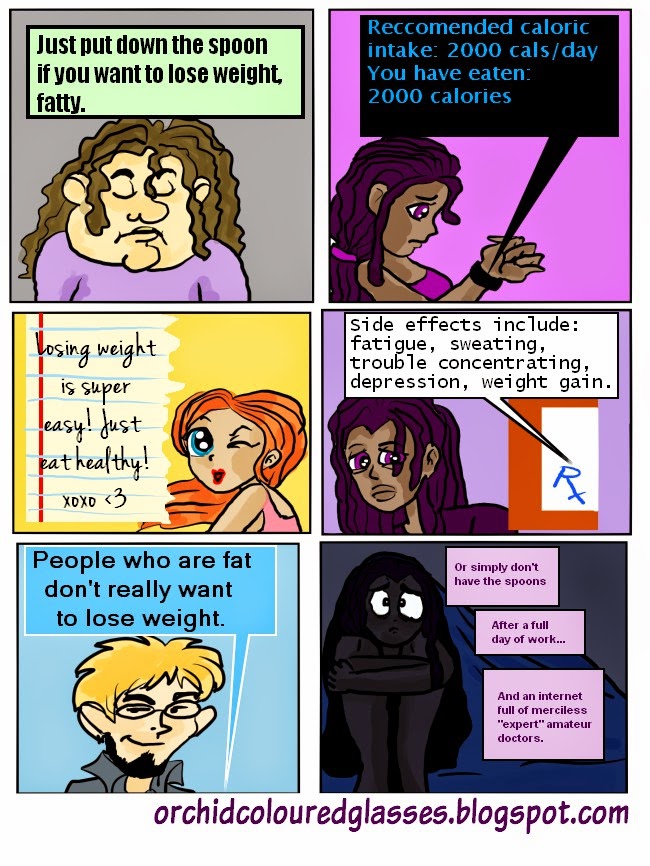 It may be a cliché to say "don't criticize until you've walked a mile in another (man's) moccassins", but it is also truth and wisdom.

You never know what another person is going through.

This "welcome to the internet, wear a helmet (or a cup)" attitude is harmful and toxic.  People think whatever opinion pops into their head is THE GOSPEL TRUTH [echo echo], IRREFUTABLE FACT [echo echo] and cannot be argued because that's just the way they feel.

One of the ones I most hate dealing with is the Expert Amateur Doctors.   The ones who have never gone to med school, have no medical license, but maybe saw an article somewhere, or watched Dr. Oz once or twice, or just have bought into the societal messaging of "you can never be too rich or too thin."  But whatever the reason, they think they can tell you that you're gross if you're fat, and that you're lazy, and you should just stop being a big old oinker of a pig and quit eating ice cream straight out of the gallon bucket with a garden trowel.

They never stop to consider all the myriad reasons a person might have trouble losing weight.   I personally suffer from the ones above.

Then there's the depression itself.  I have to expend the majority of them getting to and from work, and being "ON" all day long, which means wearing that façade that prevents the world from knowing I'm depressed, because society says you're just not trying hard enough to cope if you are depressed.  Take a happy pill.  Oh, wait. I'm on antidepressants, and guess what -- they don't work that way.

This is my particular row to hoe.  I am still trying to find ways to exercise that will fit both my schedule and the challenges I've mentioned (as well as those I haven't).   Every person's experiences are different.  Opinions are not one size fits all.

Before you fix your mouth or your keyboard to criticize or say something mean or "brutally honest" or helpful to someone fat -- consider the fact that they've probably heard it already, and you more than likely ARE NOT A DOCTOR.

Know who is a doctor?

That's the only person whose opinion matters about my weight.  And that's why I'm never making a New Year's Resolution to lose weight.  Just needed to get it off my chest since I'm seeing all the tweets about sneering gym rats, and people mocking the "fatties".  As one such:  you don't know everything, and if you act like you do, you're acting like a seven year old.