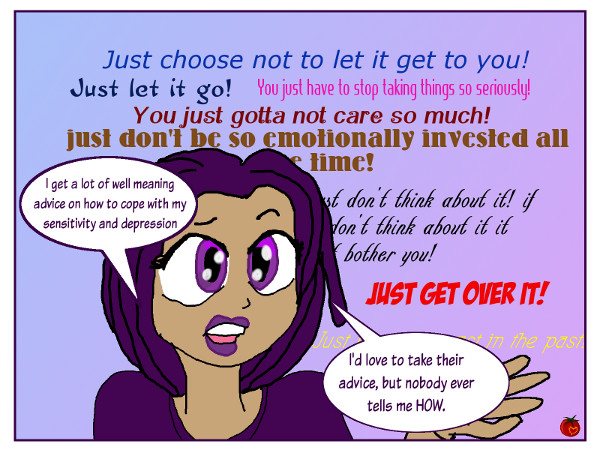 As a person who has always been really sensitive, and who suffers from both depression and anxiety, I have always had people do the "I know better than any doctor" thing (which it has taken years to see for what it truly is), and offer well-meaning advice without any real solution attached to it.

As a kid, it frustrated me, because adults are supposed to know better but stuff like this was just proof they didn't and were just as clueless as me.  Didn't do much for my faith in other people.

As an adult, I still am frustrated because people act like their well-intended suggestions are immediately understandable and that if there are steps from point A to the point B of their advice, that I should automatically know them.

The truth is that a lot of them are dodges for the advice-givers who either want to help but don't know how, or are just sick and tired of seeing me be depressed and feel (inaccurately) like I'd rather be depressed than get better, or am faking for attention, or don't want to get better.    Believe me, if you have ever been depressed from the standpoint of a mood issue, it's not the same thing from a brain chemistry problem.  I would love more than anything to be able to just shake it off, walk it off, let it go, whatever.  But I can't do that any more than a diabetic can decide that their pancreas WILL just produce insulin because they want it to.

It doesn't work that way.