The Power of Kind Words: 1 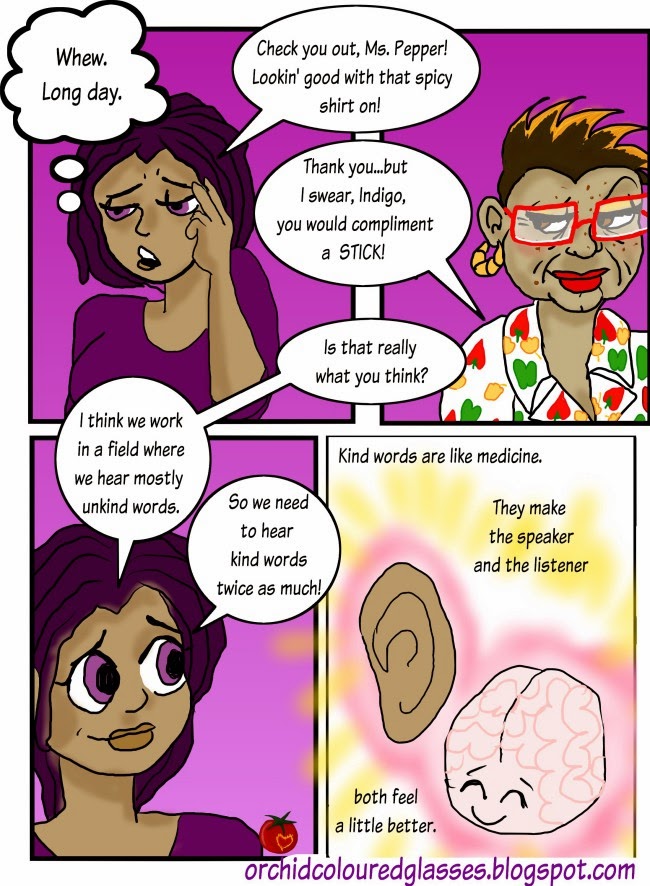 I don't remember my coworker's name, but she was a real person, as in many of my earlier OCG comics. She was a stylin' senior, who always looked sharp.  Don't know how she did it on what we got paid, but she always had her hair done (like from the salon done!)  and her clothes like new.  I called her Ms. Pepper because of that shirt.  It's real too.  Chili peppers, scotch bonnets, and green peppers all over it.
She really said that to me, too, in so many words.  I was a little stung, but I explained anyway why I gave compliments every chance I get.  She looked me up and down for a minute, then nodded and said "you have a point."  She even started trying to speak a kind word to me and others a little bit after that.
"The field" we worked in at the time was customer service.  You probably laugh along with all those jokes that show a skeleton listening to "your call is important to us"...but you tend to forget unless you've been on the answering end of the phone that the person who picks up is another human being like yourself...and you let all your frustration and irritation loose on them because the hold time has just made it feel like it's the worst thing since athlete's foot, jock itch and chlamydia all at once.  You don't stop to think about watching your language, your tone, or your volume.  It doesn't matter because the company pissed you off and the "brainless peon" who answers the phone is gonna HEAR it! It doesn't matter that the people who answer the phone can't give you what you want, and you know deep down that asking for a MONTH of free service for an HOUR of downtime is unreasonable anyway.
Think about that before you mistreat the person who picks up the phone.  Try being kind, and see if it makes you feel better. Even if it doesn't, it will make the person on the phone feel better because that's one less person being unkind.  I am speaking from experience.  The kinder I was to my customers, the less they screamed and freaked out.
A lot of people think Kindness is the same thing as weakness. It's not the same thing. It takes way less effort to be kind than it does to be mean.  Just like that old saying that it takes more muscles to frown than it does to smile.