A Setup For A Joke If I Ever Heard One 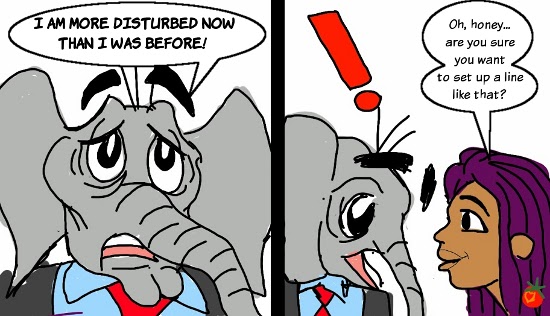 
The first I heard about Benghazi was about ten days or so  before the election.  A conservative who insists on trying to chat me up on Google+ made a post calling me out by name to ask me my opinion on it.

I hadn't heard anything about Benghazi being a scandal at all at that point, but his take was that it was a terrible blow to the Obama administration. I'd heard about the tragic attack, of course, and that was all I'd heard.

The conservative didn't link me to anything verifiable.

I Googled and couldn't find anything verifiable.

But yet, the elephants are bloviating hot air into it as much as they can to try to make it a horrible scandal.  I'm not sure what they're trying to accomplish, as President Obama has already won his second term.  They can't unseat him, and the American people are not really going to sit still for them trying to obstruct, stonewall and sandbag him like they did for the last four years -- hence the huge margin by which he got his second term.

And today, after they had their meeting with Susan Rice, one Republican was heard to remark, "I am more disturbed now than I was before".

It sounded like a straight line to me, given how frenzied the right has been since President Obama was elected the first time.