I have a suction cup mount thingie for my beloved G1, and since Atlanta has hit the time of year in which it drastically changes temperature, the thing kept dropping off the moment I put the TARDIS in its seat.

A good friend suggested some silicone lubricant. So I used the G1 and the Shop Savvy app to search for some. Found a bunch at $0MG.WTF and then finally found one at a price I could afford.

Unfortunately, the stuff that comes in an orange can, does the job, and cheaply, is called JIG-A-LOO. I shit you not. 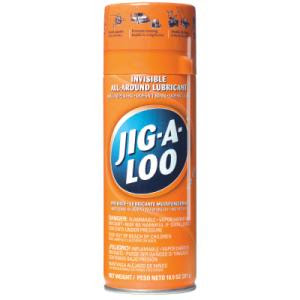 Had a lovely, awkward conversation with a black guy and a white woman in Home Depot over the choice of naming and how it was rather unfortunate...and how the person or persons who'd decided to call it that probably were thinking "Jiggle the Loo" as in "shake the handle of the toilet" given what's on the label of the product.

If you don't know why the name Jig-A-Loo bugs me, that makes you lucky. It sounds a lot like an old racial ephithet.
Posted by Indigo at 11:17 PM

Email ThisBlogThis!Share to TwitterShare to FacebookShare to Pinterest
Labels: fail, it makes me hate the universe, racism, wtf