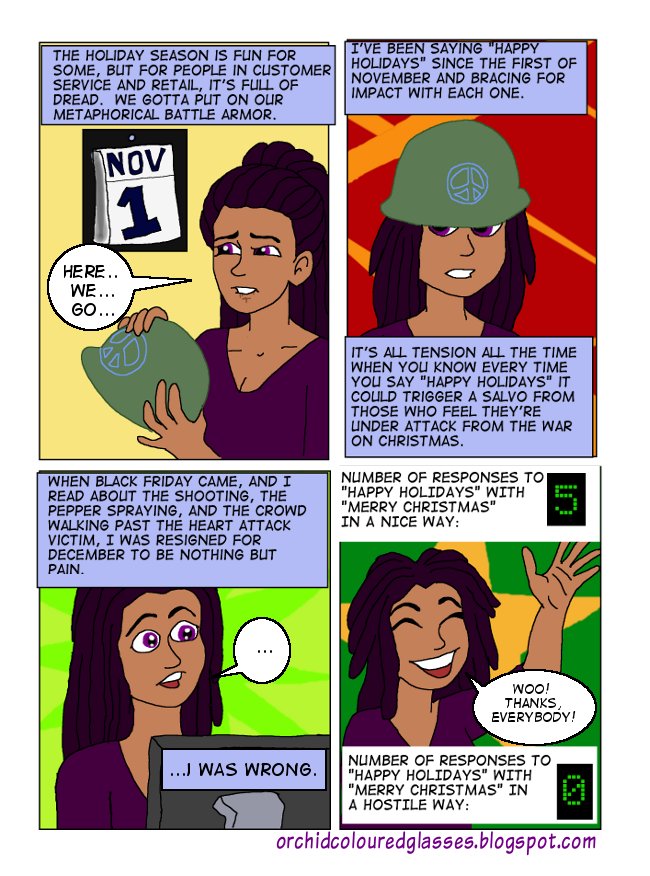 Generally speaking, I used to be a big fan of the holiday season.

No matter which holiday, nor who was celebrating what, you could count on certain things:

But in recent years, this time of year has developed some troubling tendencies:

Black Friday has scared me for a while.

They call their sales "doorbusters"  as if they are encouraging you to bust the doors, and at some subconscious level,  consumers respond to that.   We know the stores get a small amount of some awesome big ticket item that they'll have more of in the weeks remaining until Christmas, but there's something that drives them to compete for it on Black Friday.

Every year there's a story of Black Friday violence.

This year:   somebody got shot at Cumberland Mall near me, and a guy had a heart attack in a Target; the crowd kept walking.  And a woman used pepper spray on other shoppers for an X-Box (and will not face felony charges for it).

It's like we take Black Friday as tacit permission to give up the thin veneer of civilization we wear the rest of the year, and go all Mad Max. And the poor retail people and customer service people working that day, who'd rather be home with their families, are the ones who have to face this tsunami of hostility from shoppers determined to get the best deals before anybody else

But the thing that has turned this year into a time of dread for me? The War on Christmas.  The idea that saying "Season's Greetings" or "Happy Holidays"  is an indication that they are willfully and intentionally tyring to stamp out Christmas and thereby also stamp out Christians.

The truth is that as recently as 40-50 years ago, nobody had a problem with saying "Season's Greetings" or "Happy Holidays".  It wasn't considered a soulless denial of Christmas and Christianity.  There were even icons like Perry Como singing songs entitled "Home for the Holidays" and nobody freaked out about it.

So for everybody who actually took "Happy Holidays" in the spirit intended, rather than considering it an attack and an excuse to open hostilities -- thank you.  You have my sincere appreciation.
Posted by Indigo at 7:17 PM