Rock Stars from The Stars Unite! 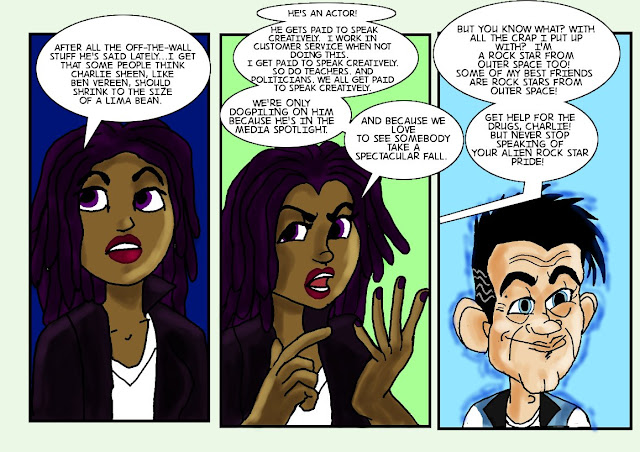 I will be the first to admit that Charlie Sheen has said some really -- unusual -- things.

He's even said things that would be better suited coming from the mouths of superheroes.    But drug-addled, or scrambled from rehab,  I can't entirely bring myself to believe he's banging off the bumpers like a pinball completely at random.   I mean he says he's riding a mercury surfboard.  He has to know that sounds like Silver Surfer.

I think he's just putting his own spin on the celebrity out of control thing.  He's not covering up his face and asking for his privacy.  He's not making out like  his issues are "some sort of ailment he just needs to recover from".  He's being honest in his own way, spoken creatively, like any actor would.

I mean, just recently, George Clooney said he could never run for office, and spoke honestly about it:

"I f--ked too many chicks and did too many drugs, and that's the truth." Clooney continued to joke that if he ran for office his campaign slogan would be 'I drank the bong water.'

This is just the new trend of how celebrities handle their fame (or their notoriety) rather than going all mealy-mouthed and trying to pretend their lives of rapid fire wealth, fame and the excesses that come from that haven't taken their toll and that they're special little snowflakes who aren't as human as the rest of us.

And as for me?

Yeah, I get paid to speak creatively.   You know those commercials about those people who say they can't understand their bill from their utility or phone company?  I deal with people like that.  And worse, they usually don't want to understand. They just want me to tell them there's been some mistake and that the lower number is the right number and the higher number doesn't exist at all.   They don't want to hear that they really ran up the charges.  So I have to find a way to explain all this in a way that makes them realize and understand that what they see is not inaccurate, it's right.  And in a way that won't make them try to blow up on me like a Michael Bay climax scene when I say it.   I have to do this day in, day out, no matter what kind of day I'm having.  I have to convince the customer I'm happy to talk to them even when they're yelling at me, cursing me out, threatening to shoot me (two weeks out from when Gabby Giffords Got shot, yet), or trying to bully me.  I have to politely and professionally let them know that these antics will not fly, and that they are not gonna get away with it, all while delivering bad news.  And I have to do it all in six minutes and get a good survey score from the customer from it.  Every time. Sixty times a day, forty hours a week.

Does that make me a rock star from Mars? Hell yes.  I should get an Oscar and an Emmy for the acting I do at my job on a regular basis.


Charlie Sheen may have his problems, but he is on the money about the rock star thing.  So -- even if you're not having  problems with hookers and drugs?  If you bust your backside at your job (like Charlie Sheen did before this mess got so out of hand)  that makes you a rock star from the stars too.
Some of my best friends are rock stars from the stars.

I know her as Seanan McGuire, and so do you if you like the October Daye series.   But you also know her as Mira Grant if  you're into zombies.   She writes Urban Fantasy, Urban Legends Ghost Fiction, Zombie Political Thrillers. She sings, she filks, she draws, and she still goes to a 9 to 5 on top of that.  You tell me that's not the making of a rock star from outer space.

Every Webcomic artist out there I know is a rock star from outer space!  That is not an easy job to do and some of them are doing it as their only job.  Some of them are doing it along with a day job.  Either way, that is a lot of time and love to be putting into the art, and a hell of a risk to take for the ones who work this as their day-to-day income source.   To say nothing of the risk to the heart and ego due to Greater Internet F*ckwad Theory because people think it is their right to tear people down by Twitter or email because they think the internet gives them access that doesn't require things like the etiquette, manners, or common courtesy we get taught face to face.  You tell me that's not the makings of a rock star from outer space.  Call it name dropping if you want to, but these people deserve the props because it is not easy to juggle a work/life balance and do a webcomic and still make money off it.

So here's to to my cosmically gifted brethren.  Raise your PanGalacticGargleBlaster to:

Tom Brazelton of Theater Hopper who faces not only a 9-to-5 job but classes, raising two children, and the random curveballs life throws at him.

Starline Hodges of Candi, who deals with school and just finished a cross country move.

Ed Gedeon of  Everyday Heroes, who has dealt with job issues taking him far away from his family, and back, and then dealing with the multiple Snowpocalypses we've had in 2011.   And yet he still finds the time to filk with a smile every single day.

Katie Cook of Gronk who just had a dangerously adorable baby and only took a week off before getting back to her comic!

John "The Gneech" Robey of  Never-Never, who is another who has to do the day job thing.

Danielle Corsetto of Girls With Slingshots, who faces health concerns (which she fearlessly tweets about) and the perils of dealing with Girl Scouts!

Joel Watson of Hijinks Ensue, who also has a kid to raise, and contend with a bad back, in addition to handling his comic as his only source of income and has to face the incompetence of people who don't treat his money with respect (again, something I know from fearless tweeting).

Randall Millholland of Something*Positive (as well as some other clever comics) who told his fans to put up or shut up -- and they, for the most part, did, donating enough money for him to quit his 9-to-5 so he could get on with doing the comic on a more regular basis.

There are a whole lot of other webcomic creators and artists and writers and brilliant talents out there I didn't mention because I don't know enough about their stories to speak on them or don't know them well enough to know anything about them other than "damn, that is awesome art", but I guarantee they deserve a trailer with an anti-gravity bowl full of their favourite colour of M&Ms too.

Hold up your Bics, people.  They deserve the props.  Even Charlie, as far off the rails as he seems to be going, because he inspired me to think about his words in a different way and see the brilliance underneath the bizarre stuff he's spouting.   Hey, they're keeping our attention on him, and they're keeping us talking about him. That may be the most brilliant thing under the wackjobbery yet.

Email ThisBlogThis!Share to TwitterShare to FacebookShare to Pinterest
Labels: celebrities, the media, webcomics