A Little Poem From My Uterus And Me 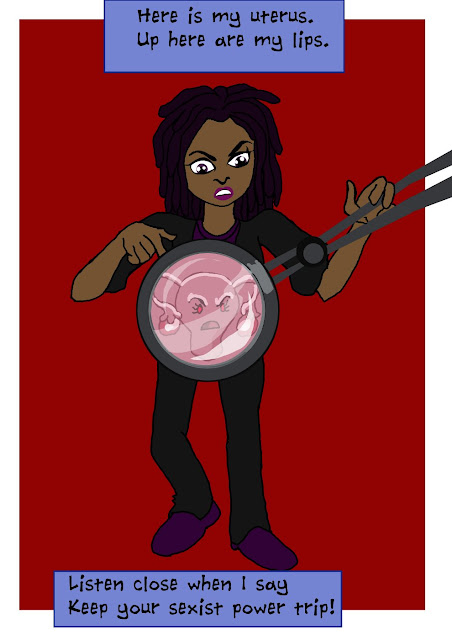 In case you haven't heard, the GOP is doing the  "ask for a spaceship when all you want is a skateboard" thing.  That means they make demands that are extremely outrageous  and back down on them, so that they seem reasonable and conciliatory when they ask for something not quite as outrageous.  And so they can say what  big meanies the opposition are for not acknowledging how accomodating and flexible they've been.

Examples, you need, examples I got:
House Republicans Try to Redefine "Rape"

Georgia bill turns woman into criminal if she has a miscarriage (which Utah tried before, and so did South Dakota) but cannot prove it was a miscarriage.  She will be investigated and if the investigators are not satisfied, charged with prenatal murder, a charge which carries the death penalty.

As if having a miscarriage is not horrifying and traumatic enough by itself -- any woman having one and not having a doctor sign off on the fact that it was just  nature/God's will/an unfortunate accident  will be potentially eligible to be put to death for something she could not control.

My sister has a beautiful little girl about to turn three.  She had a son who went to Timeheart three months after birth.  She is about to give birth to another little girl in the next 60 days.   Every one of her pregnancies was wanted.  And every pregnancy she's had has been a high risk pregnancy; giving birth to my nephew nearly killed her.

She's had a tubal pregnancy and least one miscarriage in her life.  If this bill were to become law, she'd be considered a murderer if she were here and had another miscarriage.  They'd call DFACS on her and take my niece away from her. And jail her when she's already suffering from the loss.

But worse yet?  If a woman has a miscarriage because she was mugged or abused or otherwise injured by an outside party?  They don't get charged. The woman does.

The GOP wants us to be outraged by these ridiculous, misogynistic laws, so that when they offer some other law to punish women for being sexual and for wanting the choice of what to do with their own eggs and their own bodies -- it will seem much more reasonable, and will likely go through without much pushback.

Keep your eyes and ears open.

Email ThisBlogThis!Share to TwitterShare to FacebookShare to Pinterest
Labels: it makes me hate the universe, politics, sexism